Although Taiwan is only a little over three hours by plane from Bangkok, not too many people living here in Thailand think of it as an enticing holiday destination. But after spending five days there recently, we can happily conclude that Taiwan certainly is a place worth visiting.

One fine November day, the four of us (Terri Thomas, Terri Alexander, Rose Marie Wanchupela and Netra Ruthaiyanont) flew to Taipei for a short holiday. We didn’t have great plans, just the intention to have a good time.

A peek into the history of Taiwan

Once we arrived in Taipei, the first item on our itinerary was to visit Dr Sun Yat-sen Memorial Hall. It was a good place to get an understanding of Taiwan’s history since he was the founding father of this island state of 23 million people. After passing the huge imposing bronze statue of Dr Sun Yat-sen in the hallway, we browsed through the impressive chronology of this eminent man’s life and the revolutions he led.

Next was the visit to Memorial Hall of Chiang Kai Shek, former President of Taiwan from 1949 to 1975. Not surprisingly, feng shui (the ancient Chinese art of geomancy) played a role in the design of the building: octagon shaped to symbolise fortune and wealth in Chinese culture. The numbers of steps on the stairway leading to the main hall was 89, which was Mr. Chiang’s age at the time of his death.

We then got a glimpse of legendary man’s personal life at Chiang Kai-Shek Shilin residence, the last home where he lived with his wife Soong Mei-Ling. Madam Chiang, as she was better known in many circles, was a highly influential international figure in public life, but in her private life, she loved to paint; it is her beautiful brushwork that brightens up the rather gloomy aura of the residence.

The solemn atmosphere of the residence immediately changed for the better when we silently stepped out into the pleasant and refreshing Chinese and Western style gardens. It was no surprise that this place was the first ecological garden of Taipei City as the gardens are actually more beautiful and better maintained than Taipei’s Botanical Gardens.

The most popular spot in the residence is Victoria Chapel, a simple but charming little church where the first couple prayed regularly. (We were told Mr Chiang had to convert to Christianity in order to marry Mrs Chiang – which just goes to show the power of women and religion). Today, the church still serves as a popular venue for romantic wedding photos.

Continuing to play our tourist roles, the four of us made our way to the city’s most well known landmark, Taipei 101 Tower, to get a panoramic view of the city.

A crowded elevator took us up to the 89th floor in a matter of seconds. The ride was so quick that the elevator operator barely had time to finish her introduction of the tower, which she recounted in at least three languages.

Originally known as the Taipei Financial Centre, the Taipei 101 Tower, with its 101 above ground floors and five basement levels, was once the tallest tower in the world until 2010 when it was surpassed by Burj Khalifa in Dubai.

Although the skies were a bit hazy during the time we were there, the view of the city was nonetheless breathtaking. Taipei is certainly a mature, crowded city with its fair share of traffic jams. 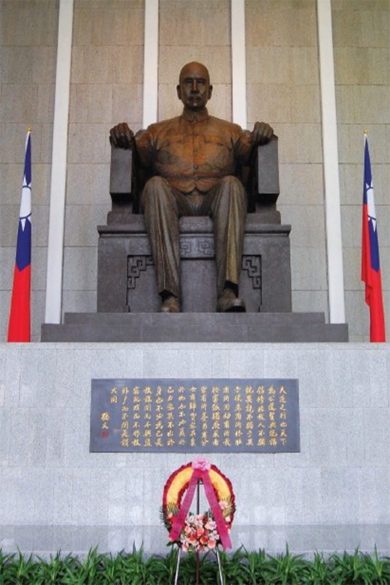 The highlight of our tour was the National Palace Museum. The remarkable history of the museum began as far back as 1925 in the Forbidden City in Beijing on mainland China. In 1933, the museum collection was moved to southwest China to avoid being destroyed by the impending invasion of Japan. Then in 1948, when the civil war between the Nationalist government and Communists intensified, 600,000 objects of the collection were relocated to Taiwan by the then government. Today, the National Museum boasts more that 690,000 objects, making it one of the most extensive art and cultural collections in the world.

The Palace Museum has something of interest for everyone: bronzes, Chinese jade through the ages, ceramics, painting and calligraphy, and pottery, amongst others. The four of us explored separately according to our interest in specific collections and came together to share numerous photographs, most of them widely different from one another. All the displays were amazing, unique and striking in their own way. We could have stayed at the museum all day but a more important activity came up – lunch!

Lunch was a delicious assortment of Chinese dishes. The saying “the way to a man’s heart is through his stomach” is certainly true when it comes to “Xiao long bao”, Chinese dumplings filled with soup and other delicious ingredients. And of course, we enjoyed the hot and spicy tofu dish that leaves one’s lips numb and puckered because of the chilli oil.

Up to the mountains

Also on our agenda was the trip to Hua Lian, which was a two hour train ride from Taipei, to tour the famous Taroko Gorge. After we arrived in Hua Lian, we stopped at a quaint little hotel for a typical aborigine lunch. We sipped millet wine from tiny boar shaped cups, and enjoyed our meal which included wild vegetable soup, wild boar skin salad and glutinous rice in bamboo tubes. Taiwanese aborigines make up about 2% of the country’s population and about 70% of them are Christian. We couldn’t help chuckling when we saw their version of a Christmas tree as it was quite unique looking.

We left the restaurant with full stomachs and droopy eyes and arrived at Taroko National Park. A favourite but dangerous place for hikers, the authorities give detailed travel safety instructions on how to prepare for hiking – watch out for falling rocks and wild animals, wear a hard hat, good shoes and bring along food and drink. However, since no one in our group was an ardent hiker, we drove around and enjoyed the picturesque scenery of striking rocks and gushing stream waters, occasionally stopping to take photos in the midst of hundreds of noisy tourists waving their selfie sticks.

We stayed overnight in this peaceful mountainous county and headed back to Taipei the next day. Our last night in Taipei was spent having dinner at the top of Mount Yang Ming and getting a spectacular night view of the bustling city.

On the fifth day, our Taiwan excursion ultimately came to an end and we headed back to Bangkok, slightly exhausted but filled with good memories and a better understanding of this unique country.

What Happened In Vietnam During New Year?

Ghost Of Hong Kong’s History Get A Modern Makeover