On a steamy Monday morning in May, photographer Daniel Herron and I visited the German Ambassador’s beautiful residence on Sathorn. We were there to meet Lucia Costantini Pruegel, the wife of Peter Pruegel, Germany’s current  Ambassador to the Kingdom of Thailand. Lucia is also the president of SHOM Bangkok, the organisation for partners of ambassadors. The acronym SHOM represents “Spouses of Heads of Mission.” I was curious to find out more about this organisation and about the interesting woman who currently leads it. 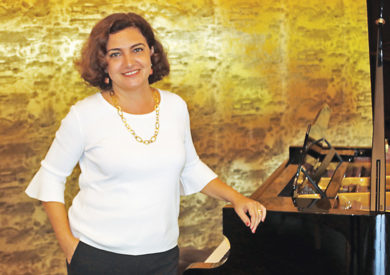 Lucia welcomed us into her home with a warm smile. She is one of the most uncomplicated, warm hearted people I know.  Her charming Italian accent and her spontaneous gestures make you immediately feel very comfortable. I mention her  accent because although Lucia and her husband represent Germany, she is a native of the sun kissed Italian city of Napoli.  My plan for our discussion was to chat about both her personal story and about SHOM and her role as an ambassador’s wife. SHOM Bangkok is the association of partners and spouses of the Ambassadors accredited in Thailand. It  was founded in 2004 with the name of DIPLOSPOUSE as a sort of club of spouses aiming to provide assistance for newcomers and a safe  place to discuss issues and concerns related to the diplomatic life.

The founding initiative was taken  by the wives of the ambassadors from the US and New Zealand at that time. At the end of 2004 the group received an  invitation to attend the celebration of Queen Sirikit’s birthday and soon after SHOM became a more formal association.  Traditionally SHOM plays an important role in both the YWCA and the Red Cross  Diplomatic Bazaars held each year in  Bangkok. More recently, the group has become more structured, with the introduction of guidelines and an association  policy including precise job descriptions for the board members. There has been a   transition to a more current mode of  communication with more use of Facebook and social media.

The organisation has  also created a new logo for use  on SHOM related materials. These efforts were undertaken during the active and successful  administration of the  most recent president, Mrs Juri Segikuchi Drofenik, spouse of the Austrian Ambassador. The   association has a monthly  meeting, hosted by the spouses at their residences, where they normally discuss ongoing   projects and plan future  activities. Often they invite a speaker to give a lecture about a wide range of topics such as human  rights or gender issues  but also about the traditions of their respective countries as well as life in Thailand. They also  sponsor cultural and  historical visits. “We want to learn about Thailand and experience all the facets of this culture,” Lucia  said. A recent outing  brought them to the Flower Museum with a Thai lunch afterwards at the beautiful Siam Hotel. An  upcoming event will be a  visit about art and antiques at River City along Bangkok’s riverfront. “I want to make clear that we  are not just a  women’s association,” points out Lucia. Currently the group has 32 members, with some very involved men   such as Dr  Kevin Colleary, the partner of the Portuguese Ambassador. The most recent development in SHOM, Bangkok is   the growth  of philanthropic activity. Once conceived only as a group to discuss internal matters and organise activities  for the  members, this year SHOM opened up to the “outside” world with some interesting charitable projects.

The rationale for this, according to Lucia, is a desire on the members’ part to interact with the society and to try and “give back” to  country. “As ambassadors’ spouses in Thailand we enjoy a very privileged life, in terms of status, visibility, lifestyle – hence the desire to give something back to society.” But the organisation and planning of philanthropic events also helps the group members. “It’s not that easy to follow your partner to different posts, leaving your own profession behind,” she explains. She also points out that often the spouses are seen almost like decoration or “belles of the ball” who do little more than attend cocktail and dinner events. “Participation in worthwhile projects that make a positive impact in Thailand give us the opportunity to use our own skills and competences,” said Lucia.

“I want to make clear that we are not just a women’s association.”

This year the group had three main projects. The “première” was a fundraising concert held last February in the garden of  the German Residence to help a non profit music school in the underprivileged area of Klong Thoi, founded by  the Immanuel Lutheran Church. The string orchestra of the school performed a programme that included classical Thai  and international music, amazing the public with beautiful renditions of Beethoven and Hayden. “Music has
such a positive influence in these children’s lives. They are dedicated to classical music and for many of them the music has  opened doors to a more empowered life,” Lucia tells me. She proudly shared that SHOM raised 1.4MB at their event. This  money will help finance scholarships for more advanced music studies for these talented children.The second big project is  also linked with education. SHOM is currently working with Thai partners to publish a children’s book of folk and fairytales  from around the world. The book will be in Thai and English and will include tales from 25 of the SHOM member countries.  The book will be distributed to needy schools and libraries throughout Thailand. In addition to the 25 members who  contributed stories, a small committee is working on this project including Dr Kevin Colleary  Portugal), Mrs Juri Sekiguchi Drofenik (Austria) and Mrs Chungwha Oh (Korea). 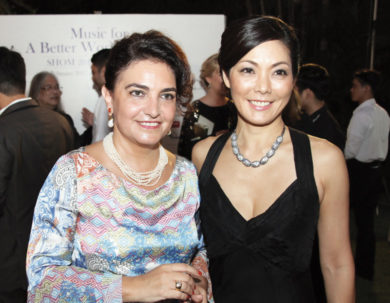 The third project has to do with wine and cheese. I immediately got interested, as wine and cheese are two of my favourite   things! As a way to use the leftover wines donated by several embassies from the February concert, SHOM organised a  special event for wine lovers with the proceeds going to the Rainbow Room Foundation, an organisation helping Thai  families who have children with special needs and learning disabilities. One of Lucia’s important tasks as president of  SHOM is to keep in touch with the media in order to give visibility to the  activities and the values the association stands  for. As a journalist, she knows exactly how to “pull strings” when it comes to publicity and how to effectively communicate  with people in the media. But who is this dedicated, fun and down to earth woman Lucia Costantini? She was born and  grew up in Napoli, Italy. At university, she studied political science and earned a Master’s degree in journalism. While studying in Paris at ENA (Ecole Nationale d’Administration) she met her future husband. He attended the same  school, a year ahead of Lucia and at one point, they happened to have a class together.

Their love story soon began. They  married in Italy in 1990. Lucia worked for some years as a freelance journalist and foreign correspondent for Italian media  outlets. She is very interested in politics and worked mostly as a political correspondent. Her husband started his career in  Bonn and since then the family has moved abroad many times. The first posting was Rome, then they served in Belgrade,  during the Balkan wars. They have also lived and worked in Paris, France, Ankara, Turkey and Tel Aviv, Israel. In between  those posts there were also two periods working at the Foreign Ministry in Berlin, Germany. “One of the most interesting  and exciting posts was Ankara,” Lucia tells me. “Because Turkey is more like a continent than a country, with a huge  diversity in landscapes, cultures and traditions. Travelling across that country can bring you from the Middle Ages to  science fiction!” Israel, as well, was a very interesting experience. “In fact, I have enjoyed all our destinations” she points  out. I had to ask her opinion about Bangkok and Thailand. Lucia admits that it was not easy in the beginning, when  they first arrived. She was not at all familiar with Asian culture and history, not prepared for the heat, the pollution and the  heavy traffic. “I’ve always been a fan of Europe,” she says, “loving above all the Mediterranean countries.” After two years  in Bangkok, she has become accustomed to the lifestyle and has started to appreciate it.

She loves her morning walks in Lumpini Park, the great choice of cuisines, the sunrise at Wat Arun, exploring in Chinatown and, last but not least, watching the the magic skyline silhouette of Bangkok at sunset. I wanted to find out if she had been travelling in Thailand and she explained that she had the opportunity to travel to northern and central Thailand and loves Chiang Mai, Ayutthaya and Sukhothai. Her favourite island is Koh Kood, near the more famous and well known island Koh Chang. “On Koh Kood you can have it all, pure luxury resorts or more reasonably priced ones as well.

The island is not  overcrowded with tourists and still has its original, unspoiled charm.” “In fact our life is like a journey. A journey through physical places, but also a journey through different cultures, traditions, ways of life, forms of art. We live a  fortunate life and a lot of doors are open to us. All this together makes my life so interesting.” It was here that we ended our wonderful morning talk. We said goodbye to dear Lucia thanked her for the tea and coffee and wished her all the best for the coming years.

Are you Saving for your Children’s University or are they Paying the Fees?

Visiting Schools On The Islands Off Satun Province